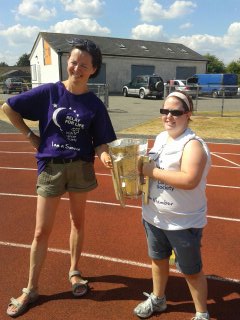 The first time I ‘Relayed’ was the first year Relay for Life started in Kilkenny.  I had just finished treatment for cervical cancer at St Lukes in Dublin and I was looking for something positive to be involved in while I recovered from the after affects of treatment.  A good friend of mine told me about the Relay and explained she had a team, she asked would I join as their Survivor and help to fundraise for the Irish Cancer Society.  Leading up to the event we were fundraising like mad, our team leader was great, I won’t name her but she knows who she is and she did a huge amount of organisation!  The event itself was better than I could’ve imagined, we had two amazing days and we were really blessed with the weather.  It was just amazing to see how everything came together through all the hard work that everybody had put into it – the committee, team members, families and friends that supported Relay.  It gave me a great, feel good buzz to know so many cared.  I didn’t really get involved again until this year as my father had a very bad accident and now has an acquired brain injury.  I had to spend a few years becoming his legal guardian taking care of him and moving him from Scotland to Ireland to live with us, he struggled to be with us and now he has moved on into a nursing home and I have more time available. The first thing I thought of was getting back involved with Relay, so I got in touch with the committee and asked if I could help out and they said they would be happy to have me so now I’m delighted because I’m so looking forward  this year’s event.  When you’re on the committee you realise just how much work goes on behind-the-scenes to make this event happen.    So to answer the real question of why I Relay, I would have to say it’s to support all the great people involved in this event, and also in remembrance of all the amazing people I met during my treatment in St Luke’s, Dublin.  It’s five years this summer since I spent many hours waiting for radiotherapy & chemo treatment, sitting with other people also waiting and getting to know them, chatting about our lives and keeping each other going.  I met so many people from all walks of life and we all had one thing in common this horrible disease.   I have to say I’ve never met so many people with such inner strength and humour helping us all to get through it.  Some of them are not with us anymore but I still remember the great sense of camaraderie between us so for all of them and for anyone else who might have to hear the diagnosis of cancer at sometime in their lives I want to help, I want to raise funds and I want to Relay.