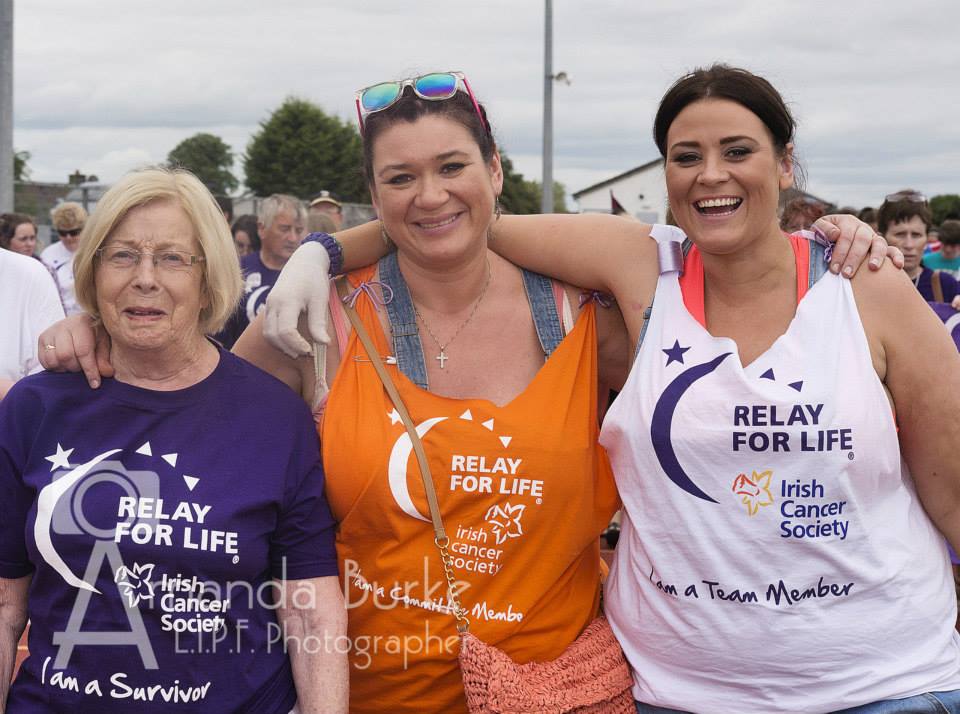 That’s me there in the orange, along side my sister and my mother in law at Relay For life Kilkenny 2014. I think it’s fair to say that I LOVE Relay For Life, I’ve been involved in it here in Kilkenny since we started in 2013.  I’ve met some brilliant people and made lots of friends through Relay.  Here is a post I wrote for my own website before our first Relay…

When I trained as a physiotherapist I never in a million years would have expected that I would end up working in cancer care, but here I am nearly 20 years on and I often get asked what brought me to oncology in the first place.  Well, it certainly wasn’t planned!   In the hazy Summer of 1999 (that was the year Manchester United won the treble…YAY!!) I found myself working as a locum physio in a hospital that I really didn’t like, I won’t name it or say why I hated it, but I really didn’t enjoy going to work in the mornings.  It got so bad that one day I rung the locum agency and told them I wanted out….there had to be something better than this, to which I was told ‘we only have one other placement at the moment and that is at The Christie’.  The Christie is a very well know cancer treatment hospital in Manchester and up until that point, I had, Thank God, never had any reason to visit it, so knew very little about it apart from the fact that everyone in there had cancer.  I think my thoughts at the time went something like ‘What would a cancer hospital need a physio for?’ or more to the point ‘what sort of physio would I be doing in there’ and I suppose my next thought would have been ‘don’t they all die?’.  But, me being me and I’ll try anything once decided that it couldn’t be any worse than the job I was doing and hating presently, so the very next week off I went to my new placement in the Christie Cancer Hospital.

From the very first moment I entered the Christie I was just amazed.  It didn’t feel like a hospital, it felt warm and friendly, homely and cosy.  There was a really positive vibe around the place and it had a brightness that shone even on the dullest, dreariest of days, and Manchester certainly has a lot of them!  – it’s difficult to describe, but anyone who has been there will know exactly what I mean.

I felt that I had been completely welcomed with open arms.  The physio’s that were working there were just brilliant and it took me no time at all to feel like I was part of the Christie family.  My work placement was on the surgical wards so it involved lots of pre-op assessments and then lots of post-op ‘getting going again’ – clearing chests, sitting patients out of bed, getting them walking and then getting them home– for many of them, this was just the beginning of an incredibly tough journey, a  journey that would impact on every aspect of their lives and for some would last for years to come.   They needed lots of help and support, and I quickly came to the realisation that these patients were so deserving and needing of physiotherapy input – and that THIS was why I became a physio in the first place – this was my ‘physio home’.  I fully expected the work to be stressful, upsetting and emotionally draining, and although there have been occasions where I have gotten very upset and cried about certain patients and their situation, I have to say that generally working in oncology has been a very positive, inspiring and life changing experience.  It has made me realise the important things in life and has completely changed my outlook and perspective on things.

Within the hospital there was an incredible openness about cancer – the word itself wasn’t said in hushed tones or avoided like I had experienced in other hospital wards in other hospitals.  All the patients  knew that all the other patients in there had cancer somewhere and that they were in the hospital for treatment of the disease or it’s symptoms.  This openness allowed a great sense of camaraderie and solidarity amongst fellow patients and amongst the staff – we were all united in the fight against this awful disease.  It is often said that ‘laughter is the best medicine’ I certainly believe that it enhances the effectiveness of anticancer treatments after all that I have experienced and observed over the years.

So ‘Why do I Relay?’ Well I Relay to say ‘Thank You’.  Thank You to each and every single person that I have had the privilege to work with and help along their cancer journey for allowing me to join them on their journey and learn so much, experience so much and become not just a better physio, but a better person too!